MainStream Aquaculture, based in Wyndham just outside Melbourne, with farms across Victoria and Queensland, is a vertically integrated producer and supplier of Australian Barramundi.

Through an advanced selective breeding program, it raises juvenile Barramundi and supplies a third of the global Barramundi industry with improved stock for production. It also provides premium table fish for domestic and international markets.

Using a design-led mindset and practices, it has achieved extraordinary growth in recent years.

This Case Study unpacks how they did it and the results achieved.

Their journey, as told by their Managing Director and Chief Executive Officer Boris Musa in an interview, has been mapped against a generic Design Process model. 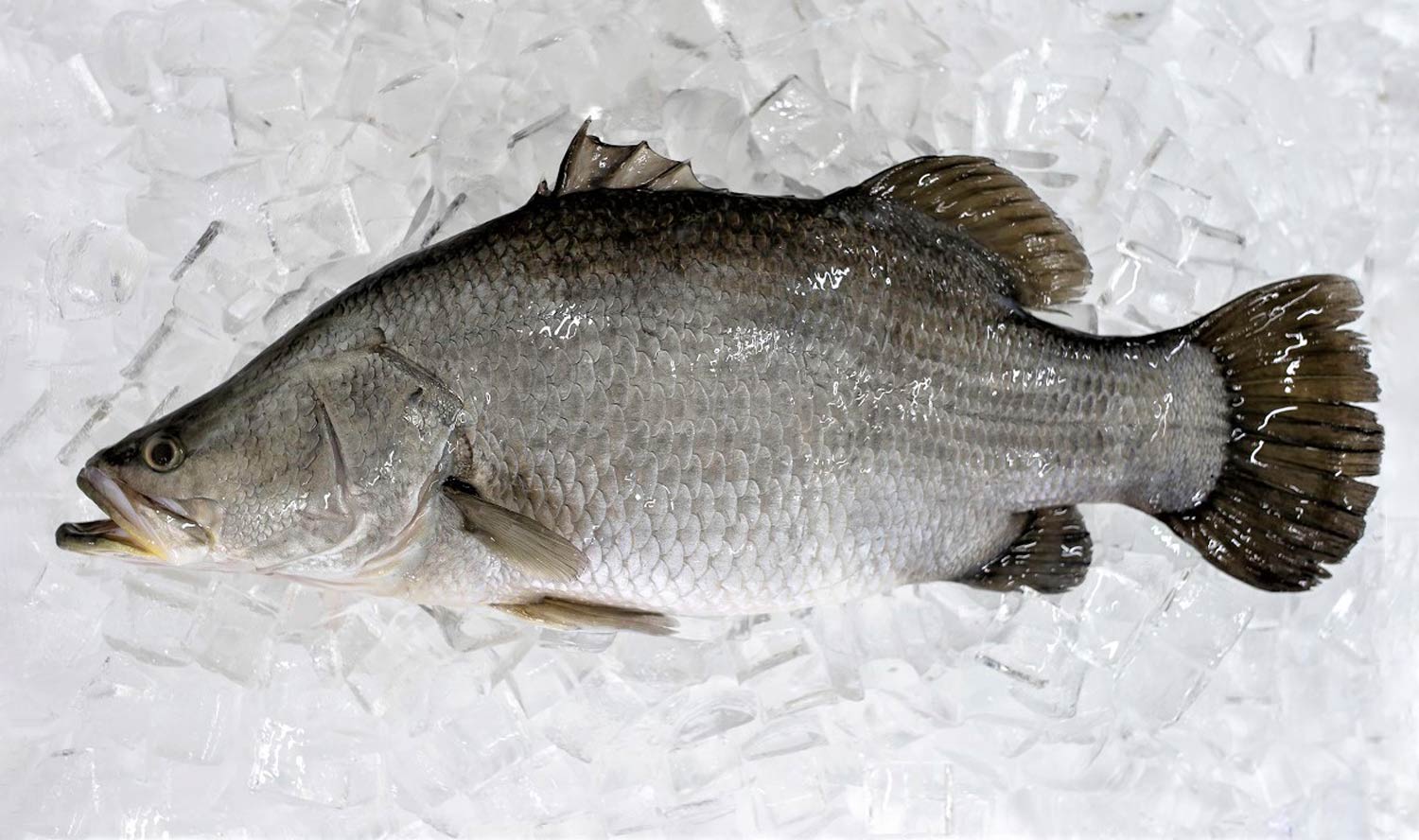 Why wasn’t Barramundi as popular as Salmon? And why couldn’t MainStream be the company to help deliver strong sector growth? We had to delve deeper into both the market and the industry to be able to answer those questions.

Ensure the right problem is being solved and then solving it in the best way possible.

“We had ambitions to scale our table fish business. However, it became apparent a key constraint was the reliable supply of high-quality fingerlings (baby fish).

It occurred to us that this constraint was not just particular to MainStream but was shared by every other Barramundi company on the planet.

We needed to further investigate both the industry itself and the end consumer to inform our strategy.”

Make sure you understand the needs, wants and desires of your customer or end-user at the deepest level possible to ensure you are solving their unmet needs.

“We conducted extensive consumer and trade research. We did this on two levels, both directly as a business but also through framing research questions at an association and industry level with the Australian Barramundi Farmers Association (ABFA).

Consumers told us that sustainable farming practices with no antibiotics or hormones was important – ultimately giving the market a better-quality product than what was imported. They wanted a safe and trusted seafood offering. They wanted to know that it came from a locally domiciled, sustainable producer of premium seafood. But what we heard the most, was the desire for more consistent product quality.

With FIAL’s help, the trade research we were able to perform through ABFA – whose members collectively account for over 90% of production – revealed structural supply chain issues and inconsistent quality standards across farms.

It also revealed that Australian Barramundi was being undercut by imported products, misrepresented as Australian origin.

How could we or the industry sustain a price premium that would underpin minimum acceptable commercial viability when it was so easy to be substituted?

It’s not about protectionism. The industry is comfortable with half-price product sourced from Southeast Asia so long as it is recognised as imported product. It simply isn’t the same as premium Australian grown Barramundi, which at its best is recognised as being right up there with the best eating fish in the world.”

Generate innovative ideas to help solve those needs and desires. Take the best idea and pursue further to ﬁnd the most feasible for the company, most viable commercially and most desirable to the customer.

“We had to think of a way of restructuring the supply chain. What if we grew our own improved fingerlings? That would enhance not only our own product consistency, but we could sell them to the wider industry, and not just here in Australia but to overseas markets too.

What if we were able to introduce provenance testing? And a base-level national quality standard across the whole industry?

It would be a way to differentiate the product and drive consumer trust and demand for Australian-made across the board.” 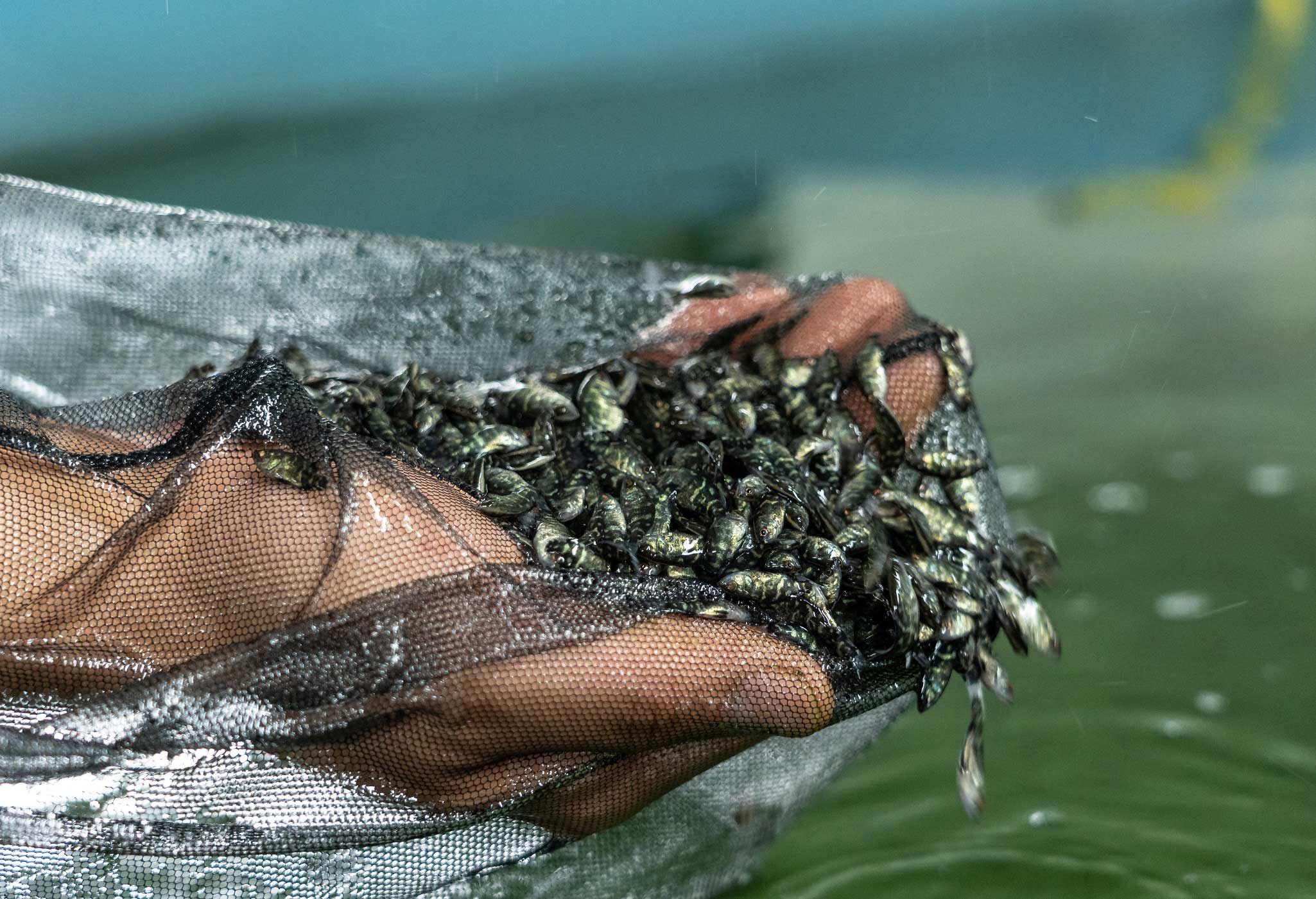 Take the best idea and turn it into a realistic outcome so that it can be tested and critiqued so that any ﬂaws can be identiﬁed and re-designed. The ﬁnal prototype is tested and validated.

“We checked in with our customers throughout our business journey. Whether from a supply chain perspective – shortening that supply chain to provide a fresher product, from a packaging or a branding perspective, or even to the extent of how we harvested and despatched our product to maximise quality. We’ve received feedback from our customers, and along the journey we’ve responded.

With the fingerlings, we undertook – and still undertake – continuous stock improvement. Through genetic selection and various stock improvement methodologies we provide what the market wants. Our fish are a lot more rotund and whiter because what we hear from the market is that they prefer a thicker wagyu type fillet cut with a lighter flesh colour. We improve these traits with our selective breeding program.” 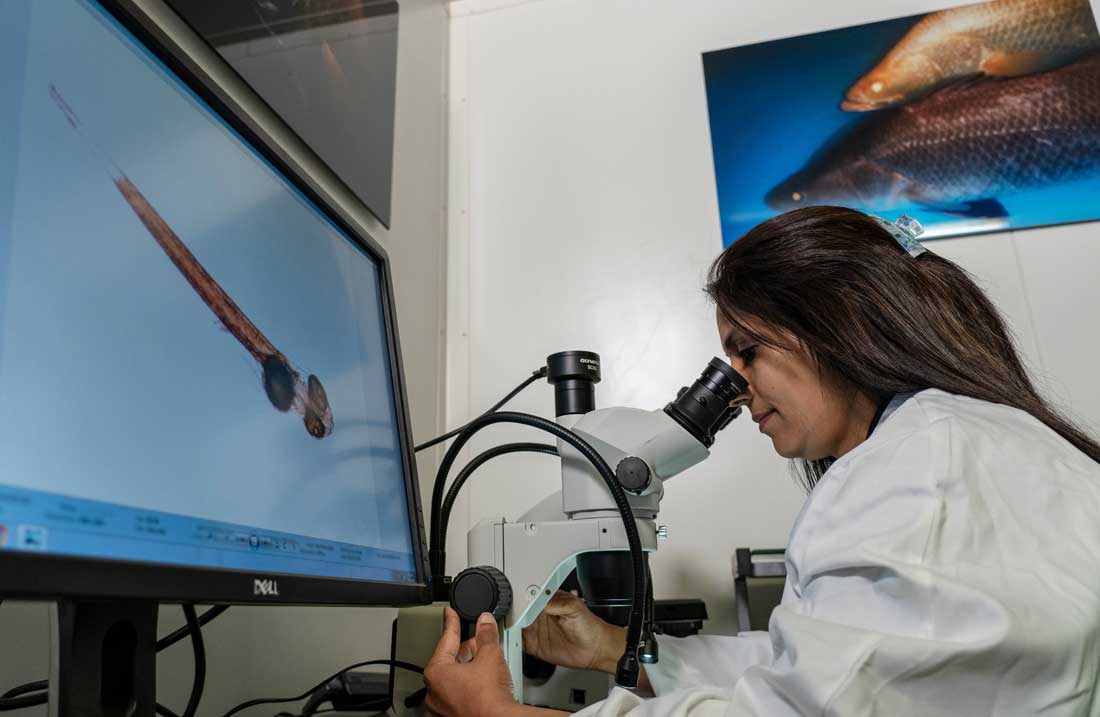 Use what we have learned about the customer to inform how we proceed.

“By understanding what the consumer wanted, as well as the wider context of the industry, it informed our:

We had no aspirations to be a supplier of seed stock or fingerlings when we started out on this journey.  Our ambitions were with scaling our table fish business.  But now we knew that it made sense to start a breeding program. We could control the quality and consistency to our own farms, as well as to the rest of the industry.

We overinvested quite substantially in hatchery infrastructure that could supply the entire global Barramundi industry twice over.

It was a gamble, but it paid off. It took less than three years for us to become by far the world’s biggest supplier of fingerlings.

We recruited people to come into the business from other sectors, to bring a wider experience. In fact, almost all of our senior executives have come from outside of the aquaculture industry.

We commissioned a branding and creative agency, going through a very comprehensive process to arrive at the right brand name, the brand portfolio, and then all the brand assets across numerous touchpoints. 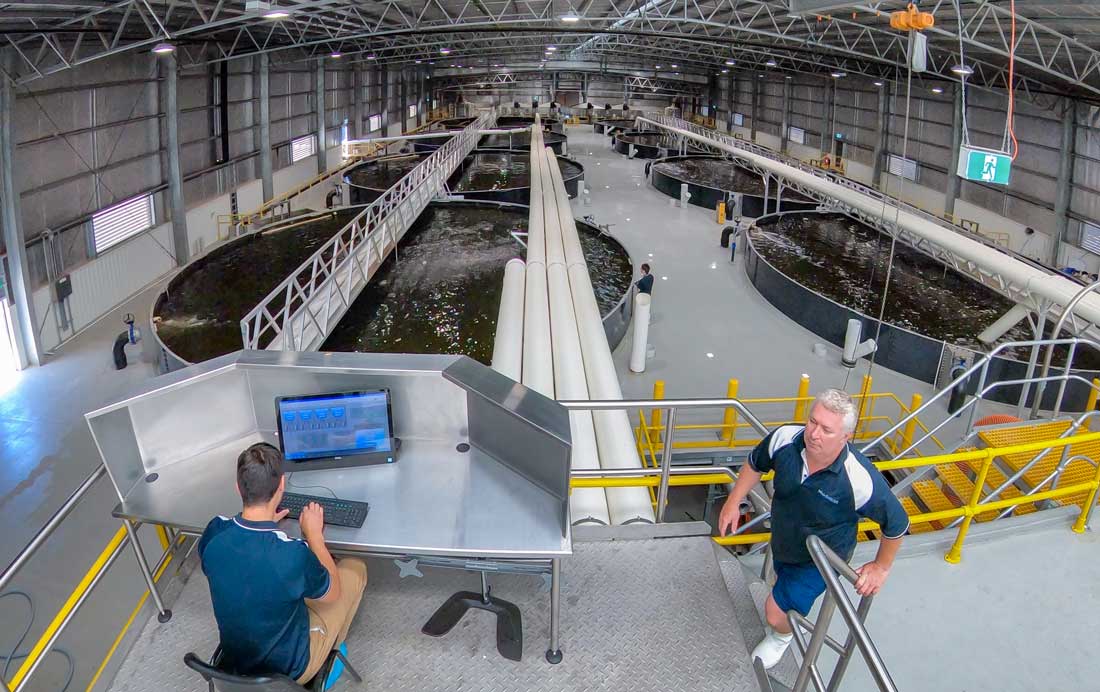 By understanding what the consumer needed we realised we needed to disintermediate our supply chain. We implemented a forward integration of our business into processing and packaging and relationships with our distributors that was more strategic instead of transactional – explaining the size of the prize and their role in helping achieve that means.

We are the only Barramundi aquaculture company in the world that is truly vertically integrated.

We now have the capacity to scale without being reliant on third party providers in hatcheries, production, processing and distribution.

It also means we now have a much greater connectivity with trade – the restaurants and retailers buying our product, as well as the end consumer through our online business. This allows us to have much stronger relationships and easier feedback loops. 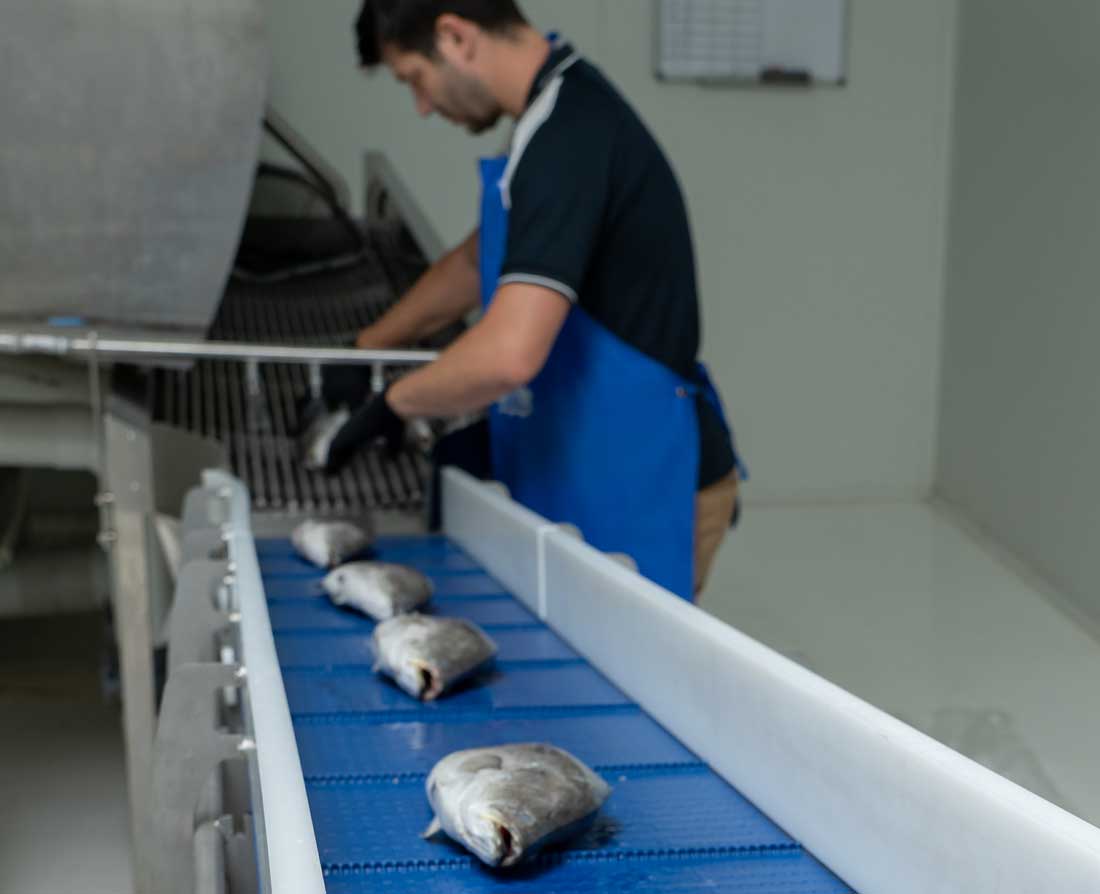 Collaborating with others in the industry through the Australian Barramundi Farmers Association (ABFA) was critical to our success. With FIAL’s assistance, we collectively commenced an ambitious program of provenance testing (through chemical evaluation of the product) and implemented a national quality framework.

We’ve had a long-standing collaboration with a number of universities including RMIT, James Cook University, University of Melbourne and Deakin. Mainly, we have needed their expertise with breeding, to make sure we get the profile of fish that the market wants.

We have also undertaken considerable research into Golden Barramundi. A rare genetic mutation, it occurs naturally in 1 in 8 million fish. We have sought to identify the molecular markers that lead to the phenotypes and the golden characteristic.

We are now at 1 in 20. This could be a game changer. It’s a highly differentiated, bright white fleshed premium fish that could offer the market something entirely new.

We sit it on the nexus of advanced manufacturing and agriculture. Deep consumer insight and market demand has driven our capital investment.

We needed to develop proprietary advanced manufacturing technology which would enable the growth and continue to deliver on the customer value proposition.

This technology is supported by the development and implementation of our own proprietary enterprise management system, built over multiple years and specifically designed for complex aquaculture operations.

Our consumer demands sustainable practices, but it’s a core part of who we are too.

By eating our Barramundi, they are saving the oceans one fish at a time.

Aquaculture has provided for the increased consumer demand for fish, where wild fisheries simply cannot.

With existing forecasts for per capita consumption of fish due to population growth and changing diets, the aquaculture industry will need to triple in size by 2050!

We operate on a zero net discharge basis, meaning that when we’re using water from the surrounding environment, we discharge that water as clean as it came into our farm.

We also don’t waste our waste! We commissioned James Cook University to complete analysis on the compositional profile of our waste to determine whether it would be a suitable fertiliser. Unsurprisingly to us it’s a wonderful organic fertiliser. Our waste also ends up in pet products.

Consumer insight brought clarity on what the product needed to be – a highly consistent fish, with firm, white succulent flesh and mild flavour.

Due to our rapid distribution channels and short supply chain, we can have Sashimi grade fish from farm to plate within hours. Just what the customer ordered!

We can also prove that it is Australian, sustainably produced, premium seafood, worthy of a premium price point.

The origin of every farmed Barramundi available in Australia is now traceable to a tank, pond, cage and batch level with 100% accuracy.

This has built valuable brand equity and fostered growth – for us, as well as the domestic premium Australian Barramundi market.” 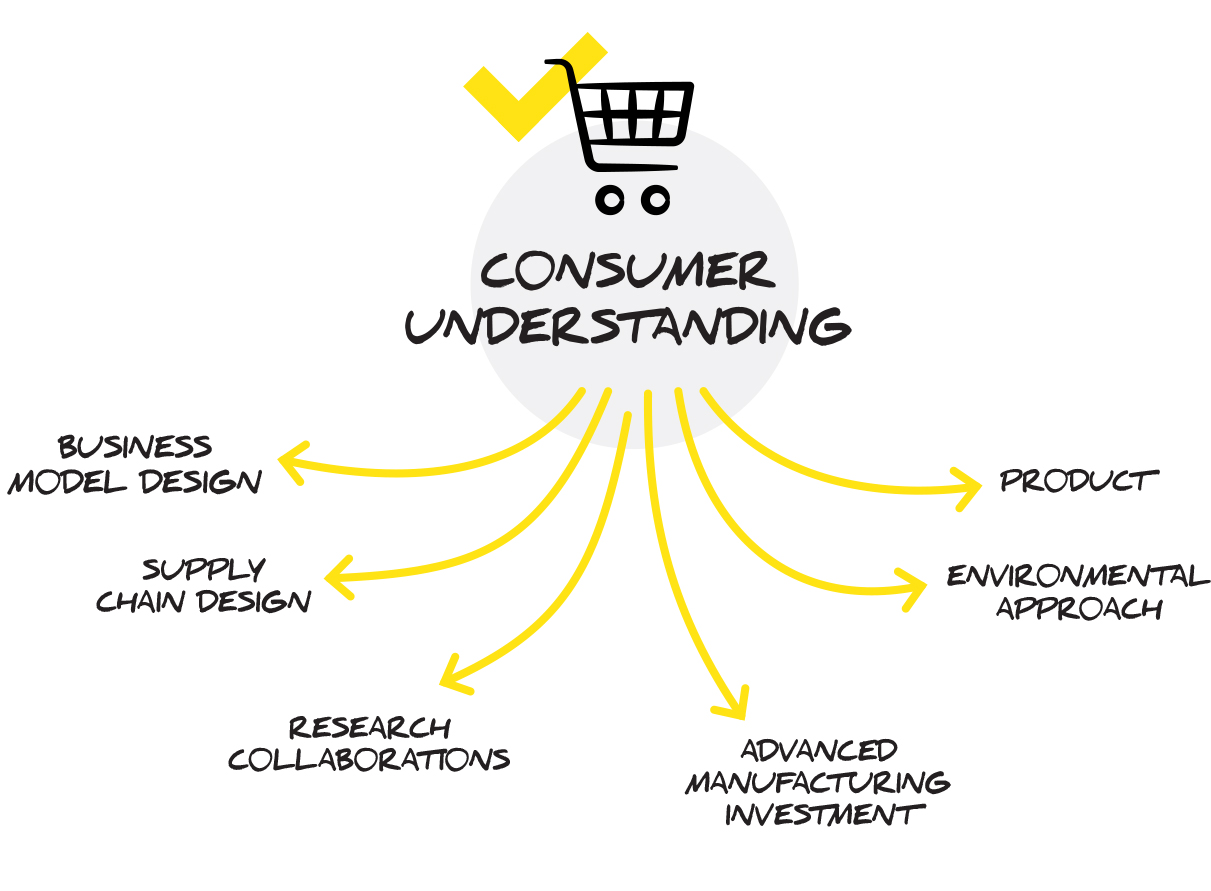 What was your biggest learning and what, if anything, would you have
done diﬀerently?

“To lean on third party professional expertise more than we did, and earlier. It can be confronting to justify discretionary spending, when you have essential expenditure in the present. But it is a false economy. Rather than make mistakes inhouse, you need to have things stress tested by those with relevant domain expertise. Perhaps we may have grown faster.”

Research into the consumer and the wider industry was incredibly insightful for us in framing our business strategy, and our path to market.

OTHER CASE STUDIES IN THE SERIES